Before the Pomegranate Theatre

The Pomegranate Theatre and Chesterfield Museum are located within the Grade II Listed Stephenson Memorial Hall. The Hall is of gothic design and was built to commemorate Chesterfield’s adopted son, the railway pioneer George Stephenson. Built in 1879 for £13,734, it was originally intended for adult education and housed a museum, library and lecture hall. 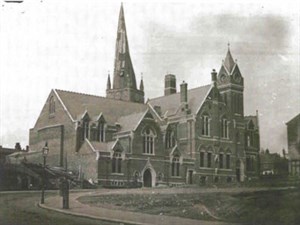 Above: Stephenson Memorial Hall taken from Holywell Street, looking up towards Corporation Street. The crooked spire can be seen behind the memorial hall. 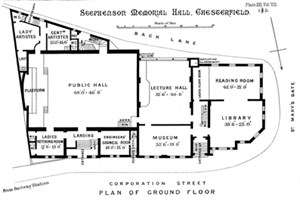 A plan showing the layout of the Hall’s ground floor when it opened in 1879.

The council bought the building in 1889 and in 1898 the Public Hall area was extended to become the theatre you see today – some of the original Victorian trusses still support the roof.

Initially called the Corporation Theatre in around 1904, it was later leased to a cinema company between 1926 and 1948. 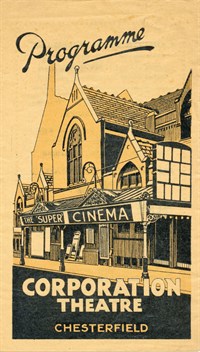 The cover of an original programme for ‘Don Q -son of Zorro’, a popular silent film of the 1920s.

After the cinema lease ran out in 1948, the venue became the country’s first ever civic theatre. There was tremendous excitement in the town when the new Civic Theatre had its opening night on 21st February 1949.

Llewellyn Rees, the then Drama Director of the Arts Council of Great Britain said, "Chesterfield’s new Civic Theatre is an example to the rest of the country."

The opening ceremony was performed by famous British screen actress Kathleen Harrison, followed by the first performance of the farce See How They Run by Philip King.

Within five years, the Civic Theatre, as it was called, had presented more than 200 different plays. 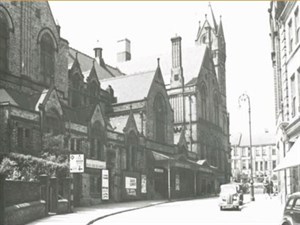 Above: Stephenson Memorial Hall taken from Holywell Street looking through to Corporation Street, theatre is on the left. The Corporation Theatre's signage has been removed to make way for the Civic Theatre, 1952. 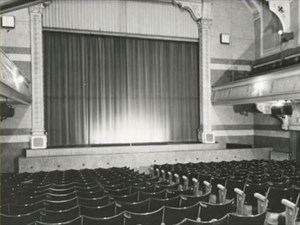 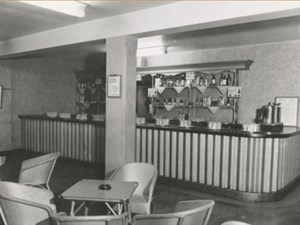 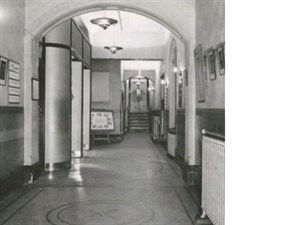 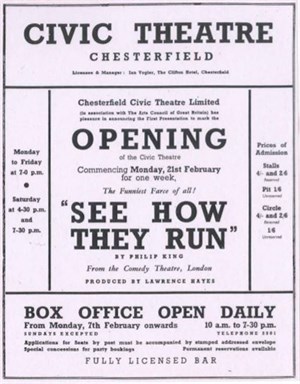 Above: Original poster advertisement for 1949's See How They Run 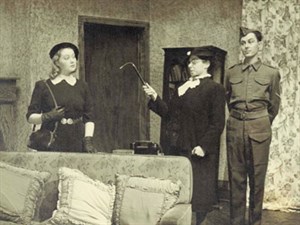 Above: Original photo from See How They Run, 1949 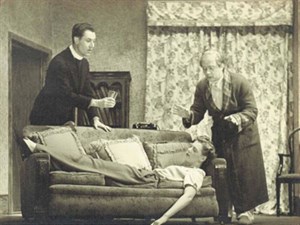 Above: Original photo from See How They Run, 1949

The age of rep

An unexpectedly large grant from the Arts Council allowed the Civic to recruit a company of 18 actors and actresses, including a young Peter Sallis. The theatre itself was remarkably well-founded, with a raked stage larger than many London stages, luxurious seating for around 700, and an orchestra pit for 20 musicians.

The stage was set for the hey-day of Repertory Theatre in Chesterfield.

In 1965, the policy changed to allow plays to run for two weeks, and by 1981, Joseph and the Amazing Technicolor Dreamcoat was smashing box office records with a three-week run that was 98% sold out.

The first of the Pomegranate Theatre

Rep came to an end in 1981, but it was just the beginning of a new lease of life as the theatre would be renamed in 1982 as the Pomegranate Theatre and following this, a wide and varied selection of touring productions would be hosted.

In 1988, to mark 40 years of operation since it opened as the country’s first ever civic theatre, its first ever play was repeated - See How They Run.

Structural changes and access adaptions improved the venue through the 1990s, with former artistic director Colin McIntyre celebrating its 50th anniversary with a gala presentation called Thanks for the Memory in 1999.

In the 21st century, the Pomegranate has seen numerous innovations, from original plays and open-air productions to a new box office within the theatre and the return of cinema, but this time with the addition of satellite broadcasts. 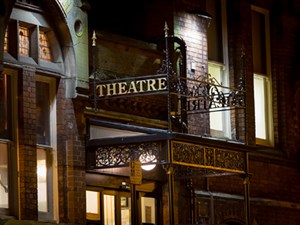 Above: Pomegranate Theatre main entrance lit up in the evening. 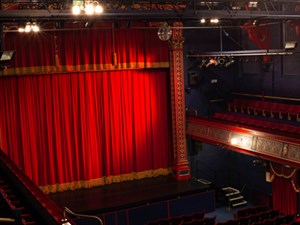 Above: Pomegranate Theatre stage looking down from the side circle. 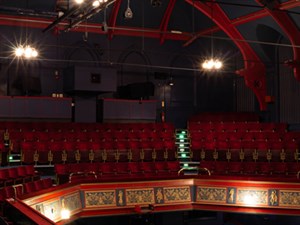 Above: Pomegranate Theatre circle taken from the side circle.

State of the art

In 2014 the Pomegranate underwent extensive improvements made possible by funding from Arts Council England, and additional investment from Chesterfield Borough Council and the Chesterfield Theatre Friends. The improvements included digital projection equipment, a new lighting and sound control room, an audio description box, new carpets and extra seats. After completion of the £750,000 work, it was reopened by Only Fools and Horses star John Challis. 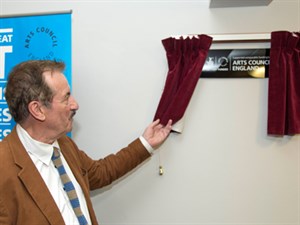 Above: Actor John Challis unveil the Arts Council plaque which as part of the 2014 reopening celebration.

Chesterfield’s civic theatre – the Pomegranate Theatre celebrated its 70th birthday in 2019 with a seven-week play season and an exhibition presented at the Chesterfield Museum, in collaboration with the Chesterfield Theatre Friends.

The seven-play season was presented in collaboration with regular companies Tabs Productions and Rumpus Theatre. A play was chosen from each decade since the civic theatre began. The plays presented were: 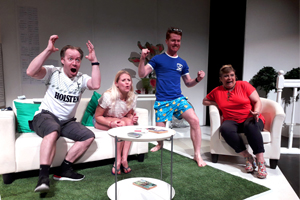 Above: left to right David Martin, Anna Mitcham, Chris Sheridan and Susan Earnshaw perform in An Evening with Gary Lineker in 2019.

The cast of the play season are below. 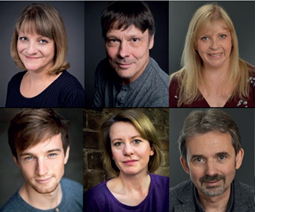 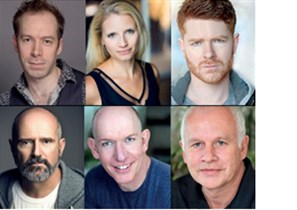 Above: Left to right Susie Hawthorne and Mark Huckett.