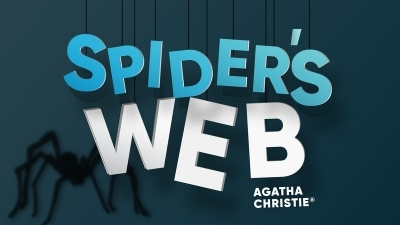 The welcome return of the Paul Taylor- Mills Company with their new production of Agatha Christie’s classic thriller, Spider’s Web, which is her second most successful play.

Clarissa, wife of a diplomat, is adept at spinning tales of adventure but when a murder takes place in her drawing room she finds live drama much harder to cope with. Desperate to dispose of the body before her husband arrives with an important politician, she enlists the help of her guests. Hilarity ensues when they are interrupted by the arrival of wry detective, Inspector Lord.

A conscious parody of the detective thriller, Christie delivers a unique blend of suspense and humour. There is tension and laughter in equal parts in an intricate plot of murder, police, drug addicts, invisible ink, hidden doorways and secret drawers.

The action of the play passes in the drawing-room of Copplestone Court of the Hailsham-Browns’ home in Kent. The time is the mid 1950s.

"Suspense, anyone? The old fashioned kind? Who's for good, clean fun? One is Agatha Christle's 1954 puzzler, The Spider's Web.” - Howard Thompson, The New York Times

Agatha Christie is the best-selling novelist of all time. She is best known for her 66 detective novels and 14 short story collections, as well as the world’s longest-running play – The Mousetrap.

Paul Taylor- Mills is currently the artistic director of The Turbine Theatre at
The Battersea Power Station, London. He has worked as advisory producer to Andrew Lloyd Webber and is former artistic director of The Other Palace Theatre, London. He produced the highly successful summer play seasons at the Pomegranate Theatre Chesterfield for three years from 2017 to 2019.