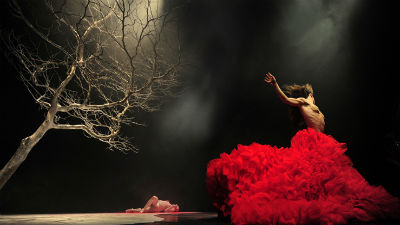 Due to circumstances beyond our control, this event has been rescheduled to Thursday 20 May 2021. Customers who have purchased tickets will be contacted by a member of the team.

Bram Stocker classic inspires a show that covers the starkest paths of evilness. The myth of Dracula, one of the most sinister characters in universal literature history, is developed now with new conceptual and plastic contributions. The work explores new languages from an imaginative and enigmatic world in a mystical atmosphere full of pain, hallucination and loss.

Cláudia Martins and Rafael Carriço are the directors and choreographers of Vortice Dance Company. Since its creation in 2001 the company has been very popular in Portugal and has presented its performances in stages of all Europe. Soliloquy, Aquarium and TGV-Liege, are some of the titles from a work defined by the strong physicality of the performances.