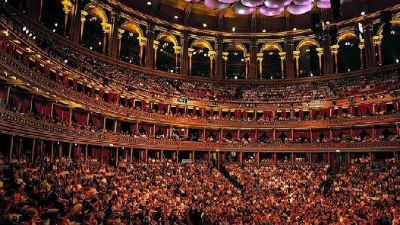 Presented by satellite broadcast live from the Royal Albert Hall

These events will not be taking place on 7th March 2021, and has been removed from sale due to Covid-19 (Coronavirus) pandemic.

We are currently in discussions with the production company for the show to be re-scheduled in the future, but this has not yet been confirmed. Therefore, at present, we are unable to confirm if this event has been cancelled or postponed, but our box office team will be in contact as soon as we know. Thank you for your patience during this time.

The Pomegranate Theatre is proud to present this satellite broadcast as part of its cinema programme.

On 8 May 1945, Prime Minister Winston Churchill made his Victory in Europe speech, in which he officially announced the unconditional surrender of Germany and the end of the Second World War in Europe.

On Friday 8 May 2020, a special May Bank Holiday to mark the anniversary, the Royal Philharmonic Concert Orchestra plus special guests will unite the nation for an inspiring and patriotic evening.

Audiences will enjoy epic, stirring and emotional music from some of the country’s greatest composers – from Elgar’s Nimrod to Walton’s Spitfire Prelude & Fugue, Holst’s Planet Suite to Ron Goodwin’s Battle Of Britain Theme and many more. The special event will also include appearances on stage by Second World War Veterans.

This event was originally due to take place at an earlier date, but it was rescheduled due to Covid-19 (Coronavirus). Customers who purchased tickets for the original date(s) are advised to read our information page.

Each ticket price advertised above includes a £1.50 booking fee. No matter how you book (online, phone, in person) or how you pay (cash, credit/debit card, voucher), the fee will always be the same. The number of trailers, advertisements and intervals (intervals on satellite broadcasts only) can vary for each screening. Please add at least 30 minutes in addition to the stated running time when calculating the duration of your visit.