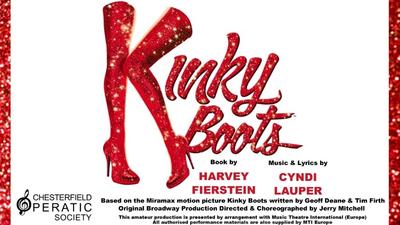 Chesterfield Operatic Society presents the Chesterfield premiere of Kinky Boots. Based on the Miramax motion picture Kinky Boots, the Original Broadway Musical with music and lyrics by Cyndi Lauper and book by Harvey Fierstein is inspired by true events and tells the story of Charlie Price.

Charlie Price has suddenly inherited his father's shoe factory, which is on the verge of bankruptcy. He attempts to save the family business and live up to his father’s legacy, and, in doing so, he discovers an unlikely hero in Lola a fabulous drag queen in need of some sturdy stiletto boots. Lola turns out to be the one person who can help Charlie become the man that he is meant to be. The result is an engaging, big-hearted spectacle full of dancing, singing and laughs.

Age guidance. 10+ This is an amateur production.

Side Circle
All side circle tickets £17.50