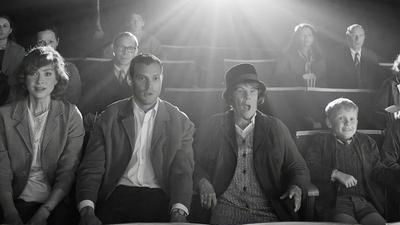 One of the most anticipated releases of the year for Northern Irish audiences, Kenneth Branagh's Belfast is a personal and joyful story about the power of memory.

Set during the tumult of late-1960s Northern Ireland, the film follows young Buddy (Jude Hill) as he navigates a landscape of working-class struggle, sweeping cultural changes, and sectarian violence. Buddy dreams of a glamorous future that will whisk him far from the Troubles, but, in the meantime, he finds consolation in his charismatic Pa (Jamie Dornan) and Ma (Caitríona Balfe), and his spry, tale-spinning grandparents (Ciarán Hinds and Judi Dench).

Belfast might be Branagh’s most reflective and personal film to date, but he brings to this intimate tale the same gift for big canvas filmmaking as seen in previous work. Shot in lustrous black and white by Haris Zambarloukos and accompanied by a rousing Van Morrison soundtrack, the film sees Buddy’s child’s-eye perspective on the increasing social unrest give way to imaginings inspired by his love of movies. Belfast is a big-hearted ode to a city, its community and to family.

"The result is engaging, tender film-making which tugs at the heart-strings, spurred by a sympathetic cast and the young lead, newcomer Jude Hill." - Fionnuala Halligan, Screen International

Please read our Covid-19 Safety Measures before you book and before your visit.

Friends save 50p on above prices.

Soft drink + sweets or Magnum £4.80
Bottle of Pepsi Max, Diet Pepsi, Tango Orange or 7up Free. Plus Magnum ice cream or a sharing pouch of sweets.

We will direct you to the collection point on arrival to the theatre. When collecting your order, simply give the name the booking was made under – you don’t need to print your ticket or confirmation email. However, having it to hand on your phone or tablet would be of help. If you have mobility difficulties, a member of the team can collect your order and deliver it to your seat in the auditorium – just let our team member know when you arrive at the theatre.

*We will try our best to have everything in stock, but the choices listed within each package may be subject to availability on the day.

The following screenings have been rescheduled due to technical issues:

Customers can book standard tickets, friends tickets and wheelchair user tickets online. Customers who are not wheelchair users and require an essential companion will need to call the box office on 01246 345 222. For more information, please see our welcome back information.