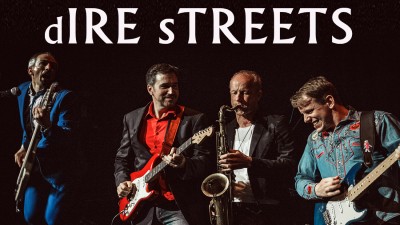 On the 13th May 1985 Dire Straits released what would become one of the best-selling albums of all time; delivering a stream of classic songs and propelling the band into global superstar status.

To celebrate the 35th Anniversary of the release of Brothers in Arms, Dire Streets – Europe’s most critically acclaimed Dire Straits tribute act – will be playing the album live in its entirety.

Dire Streets are six of the UK’s top tribute musicians, recreating the distinctive style of Mark Knopfler and Dire Straits with an attention to detail no other tribute can match.

The 2020 Brothers in Arms Anniversary Tour delivers a two-hour show including a live performance of the album from start to finish, as well as all the classic hits from the band’s other studio albums and legendary live performances.

From the classic rock riffs of Money for Nothing, the smooth jazz-tinged flavours of Latest Trick, and foot-tapping classics like Walk of Life to the epic guitar anthem title track, Brothers in Arms is a true classic album.

Join Dire Streets as they celebrate one of the greatest British rock albums of all time.