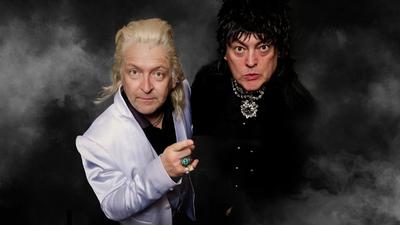 Communicating with the Afterlife?  What could be more mind expanding?!

The public are rightly hypnotised by mere mortals with extra-sensoryability and Britain is honoured to have spawned two of the most gifted mystics in the world, the coiffured titans of the Unknown - Clinton Baptiste and Ramone Tamine.

Clinton Baptiste is the notorious clairvoyant medium psychic who bravely tells the punters what the spirits are saying… whether the recipient is willing to hear the bald truth or not. Ramone is a Scottish soothsayer and spirit-channeller from the Caledonian cabaret circuit. His expertise in the Dark Arts is surpassed only in the dexterity of his cutting Glaswegian bitchiness.

Their otherworldly skills have rightly attracted audiences all over the world, but now their very public spats are threatening to undermine them. Even the Parapsychological Institute of Great Britain feel that these two silly fakirs are bringing the serious subject of Mediumship into disrepute.

Repeated requests to desist the slander have fallen on deaf ears.  Both claim to be the one true mystical seer.

Buckle up for a battle of charisma, verbal one up-manship and hair raising paranormal wizardry as the two megastars meet to finally decide who holds the title as Britain’s Greatest Paranormalist.

The rancourous badinage will propel one of them onto the canvas…..and the other into the hallowed pages of the supernatural history books!