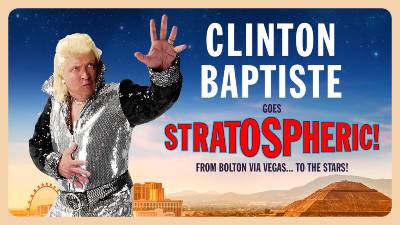 From Bolton via Vegas…..to the stars!

Not quite Caesar’s Palace but a series of shows in Vegas have lifted his celebrity status up a notch. Let him take you on a journey from his humble roots via the dazzling heights of Sin City…..

…..and on to an amazing finale that will heal the world.

Clinton Baptiste is the hapless, unsubtle psychic from Peter Kay’s Phoenix Nights.
Following his sell out tour of 2019-20 “The Paranormalist Returns”, Clinton has taken a whirlwind tour of the US.
Hear his tales of rubbing shoulders with the hippy dippy new-agers from La La Land and how he hits the big time in Vegas with his lavish psychic show.
For a while things couldn’t be better. A new lease of life, new teeth, new hair and a buttock lift. (Both of them.)
But a humbly spiritual man at heart, Clinton realises that sometimes all that glitters ain’t gold and now returns to you, his beloved British audience to once again conjure up those pure selfless gifts he was born with.

For tonight, ladies and gentlemen, Clinton will all cast fame and fortune aside……and heal the world!

“From the moment Lowe dances onto the stage the audience absolutely loves his show.”
BRUCE DESSAU

“unashamedly crowdpleasing”
BEYOND THE JOKE

“I would highly recommend grabbing a ticket. Seats are selling fast and you certainly won’t be disappointed with this great evening of comedy.”
British Theatre Guide

“nothing short of genius.”
On Yorkshire Magazine