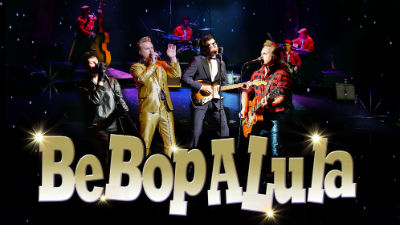 Be Bop a Lula

In 1960, American rockers Eddie Cochran and Gene Vincent flew in from the States and were joined by British heartthrob Billy Fury for the UK's very first multi-artist rock'n'roll tour.

Reviewers were appalled by the on stage antics. Audiences screamed their approval. British youth culture was born. Relive the raw excitement of these original tours, recreated and performed by some of the UK’s most talented singers and live musicians. From Cochran's searing guitar riffs, Vincent's menacingly moody stage presence, Fury's soaring vocals and Holly's classic anthems, Be Bop a Lula is a non-stop hits tour through the legendary era of 1950s Rock‘n’Roll!

Featuring the classics C’mon Every’body, Summertimes Blues, Peggy Sue, That’ll Be The Day, Halfway to Paradise, I’d Never Find Another You, Bluejean Bop, Be Bop A Lula, and many more!

‘Performed with the love, care and respect that great Rock And Roll deserves’  BritishTheatre.com