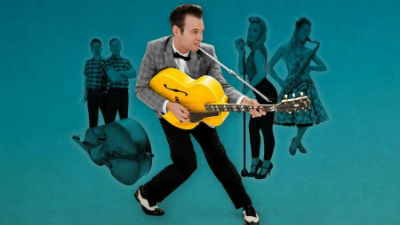 Award-winning band The Bluejays (featuring stars of Buddy – The Buddy Holly Story, Dreamboats & Petticoats and Million Dollar Quartet) take you on a jiving journey through the fabulous fifties. Packed with over 40 classic hits including Rock Around The Clock, That’ll Be The Day, Jailhouse Rock, Johnny B. Goode, Tutti Frutti, C’mon Everybody, Stupid Cupid, Great Balls of Fire and La Bamba, all performed live on stage, Rock and Roll Revolution will transport you back to the era when music changed the world forever!

From the early days of Elvis Presley, Johnny Cash, Carl Perkins and Jerry Lee Lewis at Sun Studio, via the brief but brilliant careers of Buddy Holly, Ritchie Valens and Eddie Cochran, right through to Rock ‘n’ Roll’s heyday with artists such as Cliff Richard, Connie Francis, Bill Haley and his Comets, Dion and the Belmonts and Little Richard – Rock and Roll Revolution is a whistle-stop tour through music’s most defining decade!

This event was originally due to take place at an earlier date, but it was rescheduled due to Covid-19 (Coronavirus). Customers who purchased tickets for the original date are advised to read our information page about rescheduled events.